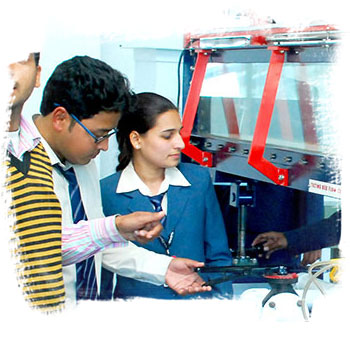 Objectives of this Theory of Machines lab are to impart practical knowledge on design and analysis of mechanisms for the specified type of motion in a machine. With the study of rigid bodies motions and forces for the transmission systems, machine kinematics and dynamics can be well understood. 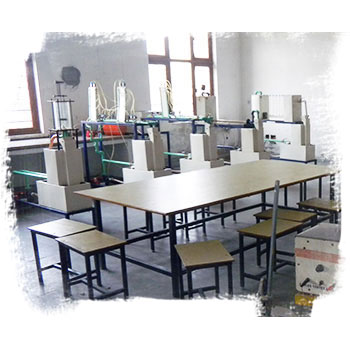 Understanding of how materials behave like they do, and why they differ in properties was only possible with the atomistic understanding allowed by quantum mechanics. The development of this science allowed designing materials and provided a knowledge base for the engineering applications.

Objective is to give a broad understanding of common materials related to mechanical engineering with an emphasis on the fundamentals of structure-property-application relationships.

In this laboratory, students will have the opportunity to apply loads to various materials under different equilibrium conditions. The student will perform tests on materials in tension, compression, torsion, bending, and impact. These conditions and/or constraints are designed to reinforce classroom theory by having the student perform required tests, analyze subsequent data, and present the results in a professionally prepared report. The machines and equipment used to determine experimental data include universal testing machines, torsion equipment, spring testing machine, compression testing machine, impact tester, hardness tester, etc. Data will be collected using Dial indicators, extensometers, strain gages and strain indicator equipment, as well as load and strain readouts on the machinery and graphing capabilities to print relevant plots for analysis.

In this Lab students learn about the discharge and flow through various apparatus. We have Reynolds Apparatus, Bernoulli's Apparatus, Orifice & Notch Apparatus, Venturi-meter Apparatus, and Loss due to friction in pipe lines.

This lab introduces student practical knowledge of behavior of fluids which they are earlier studied by using mathematical equations. It involves study of various properties of the fluid, such as velocity, pressure, density and temperature, as functions of space and time. Fluid mechanics is the branch of physics which deals with the properties of fluids, namely liquids and gases, and their interaction with forces.

The lab is equipped with different flow measuring set-ups such as venturimeter, orifice-plate, pitot tube, rotometer etc., where students can visualize the basic theory of working of the flow meter. The lab also has Reynolds's setup, free-forced vortices setup, flow over open channel and impact of jet set-up, where students can fortify their theoretical knowledge.

This lab is regarding internal combustion engines and their performance, parts and recent advancements. Some of the experiments which are performed by students are performance studies of both C.I. and S.I. engines, studies on the calorific values, exhaust gas characteristics, extensive studies of bio-diesel with both engines, types of air compressors, ignition system etc.

Hydraulics and fluid mechanics, or the study of liquids, is an important area for Mechanical Engineers. Whether designing a steam engine, or working on a pump or turbine, Mechanical Engineers need to know how the water or liquid is going to move or operate. This allows them to create and maintain important machines that power our everyday world.

In this lab the students can perform experiments on the A C test rig, refrigerator test rig, Ice Plant test rig, cooling tower test rig and also studies on various systems and sub systems related to refrigeration and air conditioning.

In this Lab students are asked to perform the various experiments related to different mode of heat transfer through various sections and geometries.

In this lab the students can perform experiments on the A C test rig, refrigerator test rig, Ice Plant test rig, cooling tower test rig and also studies on various systems and sub systems related to refrigeration and air conditioning.

In this Lab students are asked to perform the various experiments related to different mode of heat transfer through various sections and geometries.

we have software of solid works in our cad cam lab. In this software students can design drawing and analysis the machine components of various machines. CAD/CAM (computer-aided design and computer-aided manufacturing) refers to computer software that is used to both design and manufacture products.

CAD is the use of computer technology for design and design documentation. CAD/CAM applications are used to both design a product and program manufacturing processes, specifically, CNC machining. CAM software uses the models and assemblies created in CAD software to generate tool paths that drive the machines that turn the designs into physical parts. CAD/CAM software is most often used for machining of prototypes and finished parts.

Each shop is spacious enough for the students to work comfortably. Workshop provides the students with hands-on experience on the machines. In workshop we have Lathe machine, milling machine, drilling machine, shaper & planner machine etc. Mechanical Engineering Workshop is a place where students acquire knowledge on the operation of various processes involved in manufacturing and production. The Workshop Practice course makes students competent in handling practical work in engineering environment. Workshop is the center of learning about engineering Materials, manufacturing practices, equipments, tools and safety precaution to be observed in manufacturing operations.